If you have any questions regarding Adam Faith and his career, please use the Adam Faith Appreciation Society page on Facebook.

The scans of pictures, photos, articles, programmes etc. are provided purely for the entertainment and education of those visiting the site. Obviously we do not own the copyright of anything, nor do we have permission of those who do own the copyright. In the majority of cases the magazines and newspapers concerned are no longer in existence, but if anybody still connected to them objects to any photos or articles currently on display, we will of course remove them.

Adam Faith’s mum lived next door to my nan in Bromyard Avenue, Acton. She shared a party phone with them and his mum used to baby sit my auntie when Adam was a young man. I have his autograph somewhere!

I recorded an album with Terry in 1993

I recorded an album with Terry in 1993. Midnight Postcards was not the album that i had suggested to Terry and his producer, Dave Courtney. Terry was appearing with Zoe Wanamaker in “Love Hurts” a very successful tv show at the time.

My concept was an album of love songs including Love Hurts. Polygram loved the idea … TV promotion was booked.

The resulting album was not what Polygram were expecting. It was a mishmash of odd songs and bits of what Courtney described as Skiffle. It failed miserably.

I liked Terry and attended a dinner at his house, that story being in my forthcoming autobiography. I also met his daughter. I believe she became a tv producer.

My regards to Terry’s family and belated condolences on his passing. Rock on. 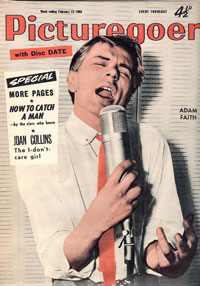 Adam Faith you were my idol

adam faith you were my idol in teenage years you were absoltely brilliant and gave me many years of happy music, when i was going through a rough time in my life but your music always made me feel so happy and pick me back up again , and i loved your acting in budgie , very funny acting , so sad to hear you died all those years ago, ill never forget you thankyou for all your entertaintment youve given everyone and god bless all of your family. from your fan for many years love sandra xxxxxxx

I have just come across your site, and just listend and watched adam on the youtube, lovely memories! way back in the 70’s I have liked him and had his pics up on the wall at home and at work, were everyone else was into more modern stars I still preferred adam! I would listen to my old long player record player with adams songs and wish I could see a virtual reality of him there on my record player! but now with the internet anything is possible! I noticed (though I am not complaining that he would not go on tv much and I waited from Budgie 1970 to 7 years later and stardust and mcvicar at the cinema. oh yes I also recall a YOU ASKED FOR IT in the MIRRABELLA magazine 1976 sept 16th my letter being printed in this teeenage mag asking for an adam faith pic! also I got a 3 in a row songs by adam on the David Hamilton show this had me hopping around the work floor! in excitment!. thanks for the memories Pamela Gregson

I met Adam when I was a boy

I actually met Adam when I was a boy. I think the seaside resort was Yarmouth, but not sure. Anyway, I was on holiday with the family, and big sister wanted to try and get his autograph outside the theatre’s stage door. This was in the afternoon, so I imagine everyone was either turning up for rehearsals or maybe that summer night’s performance. (My sister tells me we actually saw the show, but I have NO memory of that whatsoever.

Anyway, mum and dad dropped us off at the theatre and we joined a small group of girls who had already gathered there. Whilst waiting for Adam to arrive we gathered autographs from everyone who went past. None of the names meant anything to me, but years later of course Rod Argent of the Roulette’s would have success in his own right when I was an art student, and I remember digging out his autograph to check if it had indeed been him who signed my book that day. It was.

Eventually a green jaguar pulled up and, to a warm and excited reception, Adam Faith got out. As he made the short distance to the stage door he signed autographs and someone handed out flyers promoting the movie “Mix Me A Person”. Being somewhat smaller than these 20 or so girls I somehow got caught up in the push, and before I knew what was happening the stage door had shut behind us and it was just me and Adam Faith stood face to face in the narrow corridor on the other side!

Having been keen to push my way forward for an autograph, I think the only thing I thought of doing now was escape. He looked at me and said “What do you want curly?” I nervously asked: “Can I have your autograph please Adam?” He was wearing Cuban heels, which still didn’t take him up much beyond my height, and he hadn’t yet shaved.

When I re-emerged from the stage door I was something of a hero, albeit for a brief time. I still have that autograph today. It’s inside my “E.P. Collection” CD. (I no longer have Rod Argent’s). And I still play his music; “The Reason” probably being my favourite.

hi, am very sorry to see you shut down your guest book, unfortunatly there are always some that ruin it for others if their not interested why do they bother looking. its a great website tribute to adam faith, he was a lovely person and i used to fancy him like mad in the 60s/70s, i used to look forward to “Budgie” each week i loved that series and remember he used to wear what lookrd liked a leather jacket, in white in the series, such a shame he died i was lucky to get his autograph my sister went with her then boyfriend to hastings some show i think and he was sitting on a bike or two, anyway im sure hed be proud to see this website and read the lovely comments from fans. all the best sandra.

In Germany nearly nothing is known about Adam Faith

Here in Germany nearly nothing is known about Adam Faith. Only four 7″ Singles had been released in the 60`s and non of it reached the Charts. His Films Never let go and Beat Girl were shown in German Cinemas in the early Sixties. The German Filmprogramm “Illustrierte Filmbuehne” were issued with their German Titles “Gib niemals auf ” and Heiss auf nackten Steinen”. Also three Picture Cards of Adam are known. I believe that`s all.

Meetin Adam Faith outside the tea rooms in Westerham

hi, i just thought i would let you know about the time i met adam faith, he was outside the tea rooms in westerham as usual! i was attending a wedding at the church there on aug 22nd 1998, i was getting in my car after to go to the reception and my husband saw him so i made him repark and i got out and went up to him and said excuse me can i have your autograph, he was very chatty and friendly didnt mind at all being asked as he was having a cup of tea and reading his newspaper, just blending in with everyone else, lots of people were used to him always being in westerham either the tea rooms or the wine bar!

i had my photo taken with him- i was in my wedding outfit and hat and taller than him he was just casual and normally dressed it did look funny posing in a wedding outfit!! he asked what i did for a living ,i was mobile hairdressing at the time and he asked for a card but i said i havnt got any business cards on me at the wedding, he told me i should always carry cards with me no matter what! so from that day on i always have a business card in my bag to give to people, ive never forgoten that piece of advice from a business man!he did take my phone number but never phoned for that hair cut, how dissappointing! i was very upset when he passed away, i often listen to his cd and watch stardust-my favourite film.i still think of him.

I met Adam Faith in the early Nineties

i met adam faith in the early nineties in a large texaco station outside brighton on a bank holiday. as i had met a few so called celebrities because of my work at that time i must say i was impressed by how down to earth he was . instead of craving for attention like almost all of the pathetic characters i had met , he came in the shop while i was in a long queue walked all the way around the back unnoticed and grabbed a coke. we both met at the counter and i asked how he was doing and he replied and asked about me. i was conscious not to appear to be a nuisance but i wish i had spoken to him a bit more especially as i bought his autobiog later on and knew more of his talents. another opportunity squandered is how i fondly remember that day.